Yesterday was a beautiful summer day in the Bay Area, complete with sunshine to warm the tourists, and a strong breeze to assist the many sailboats cruising around the bay. Yet for me, it wasn’t exactly a typical summer day.  Three of my interests converged: yoga, the Camino and beer.  What does yoga have to do with the Camino de Santiago? For my Camino, a lot.  And beer? Also a strong Camino connection, but I will explain this in part two.

My morning began with a subway ride to San Francisco to participate in the Yoga For Hope event, a tradition I have enjoyed over the past few years.  I was surprised to see sunshine when I emerged from the Powell St. BART station at 10:15 am, as it was overcast in the East Bay (usually it’s the other way around.) I headed up to Union Square, found a spot to place my yoga mat near the other yogis who made it by the opening bell ceremony.  I quickly joined the asanas (pose sequences) led by the first featured yoga teacher.  To my delight, her playlist included some of my favorite funk songs like Parliament’s Flashlight and Lakeside’s Fantastic Voyage.  Then the DJ played Digital Underground’s Humpty Dance.  Imagine about 200 people in the center of SF’s shopping district, moving in unison to these grooves.  Some tourists started to bounce along to the beat while others mimicked our poses and took photos.  A few onlookers scratched their heads.

After that incredible warm-up, I knew it was going to be a good day. More teachers took the stage for 20 minute cycles to lead us in various asanas while the DJ played  groovy playlists.  When I was in the upward-facing dog pose, my view was Tiffany and Company. In right-side plank pose, the posh St. Francis Hotel.  In left-plank I saw Nike and construction scaffolding, and in downward-facing dog, I could see the upside down versions of Macy’s and the Cheesecake Factory. When we finally settled into shavasana (relaxation pose), I looked up to see the Goddess of Victory statue. She’s a beauty, and just look at that balance!

I was grateful for my yoga practice for allowing me to be comfortable despite being surrounded by shopping temptations, city chaos and gawkers. As we were all lying down in meditation with the sounds of bells and downtempo chill music, a homeless guy walked by and yelled “Ha – Ha – wake up people!”  I chuckled to myself at the irony of that situation and said a little prayer for him, and for those who are suffering.

I also went out of my comfort zone to try Acro Yoga with some Om Power teachers. I am an experience junkie, so I gave it a shot.  This move was a practice in strength and trust. Luckily I didn’t fall because that yoga dude was tall! 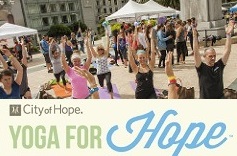 The yoga sessions ended with a celebration for the funds raised, totaling over $45,000 to benefit patients with cancer, diabetes or HIV/Aids. So far I raised $160, or 64 % of my $250 goal.  Tax-deductible donations can still be made online for this excellent cause.  Help me reach my goal and I’ll be forever grateful.  I will be paying it forward by leading yoga sessions on the Camino for pilgrims to help minimize injury caused by long-distance walking.

When I left the event, I stopped at one of those big puffy heart sculptures at the four corners of Union Square, Hearts in San Francisco.   Tony Bennett actually designed this one and named it “America’s Greatest City By The Bay.”  I heard his famous song in my head and definitely felt the love for this beautiful city.

After these yoga events, I usually get lunch and a cappuccino at Emporio Rulli, then stop by my favorite stores, Desigual, Uniqlo, Sephora and The Body Shop. But after three hours of yoga, I was a thirsty peregrina on a mission. I attended The Beer Mile event on Treasure Island and met one of the founders of Camino Brewing Company.

One thought on “Yoga for Hope Festival in San Francisco”