Why do people say the Camino provides?   I am delighted to share another response to this question written by John Twort from England, who has walked eight Caminos!  Below is John’s list of Caminos undertaken and in progress:

John shares his thoughts below on what the Caminos provided him. 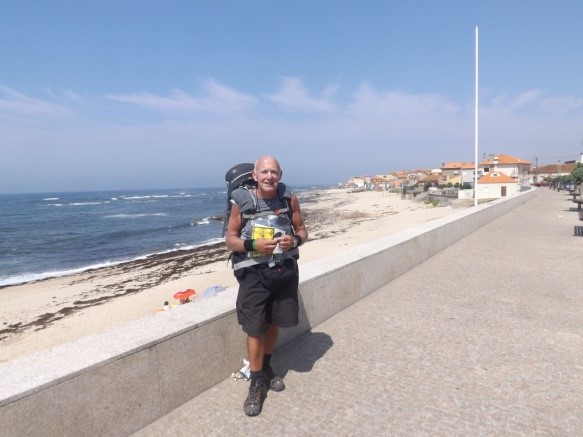 On my blog I confess to being an “Ensuite Pilgrim”— that is because I don’t like albergues and I can afford not to stay in them. I am now 69 years old and walked my first Camino, 11 years ago, from Sarria to Santiago, with a large group, aiming to raise funds for a young peoples’ residential centre, run by the Archdiocese of Birmingham, England.

After retiring nine years ago from my post as Headteacher of a Catholic primary school in a challenging part of the city of Birmingham, my thoughts returned to the Camino.

I walked the Camino del Norte from Luarca in 2011, Camino Portuguese Central in 2012, and the alleged “coastal route” from Lisbon to Porto (it doesn’t exist!) in 2013.  Antonio Machado captures this unmarked route exactly in a poem, “Caminante, no hay camino, se hace camino al andar.”

Most recently, I have walked part of the Via de la Plata, from Seville to Caceres and the Camino Inglés. With the exception of the Portuguese coastal from Porto, which I walked alone, all the other walks were in groups of various sizes.

Why? I have a love and fascination for Spain; its peoples and its history. Years ago, I came across James A. Michener’s book, Iberia, in which he stated rather grandly that he had “long believed that anyone interested in either the mystic or the romantic aspects of life, must sooner or later define his attitude concerning Spain.”

Writing about such a variety of Caminos is not scientific; it is either an emotional or spontaneous selection from memory, aided and sometimes confused by my blogs! However, to describe what the Caminos meant to me, or gave to me, I have to make a division between those I took before two successive traumas—I had a stroke, and then cancer struck me. What remained the same were the necessities, listed perfectly by Ralph Waldo Emerson. “Few people know how to take a walk. The qualifications are endurance, plain clothes, old shoes, an eye for nature, good humour, vast curiosity, good speech, good silence and nothing too much.”

After suffering and recovering from the stroke in autumn 2012, I walked the Coast from Lisbon to Porto with a group I knew well in June 2013. I was frustrated by the route and by some of my companions; so it remains bittersweet in the memory. Therefore, to regain my self-belief and self-reliance, I determined to go solo along the coastal path from Porto to Santiago in September 2013. There was probably another compelling reason too, only I haven’t been able to define it yet. It’s rather like this interesting formula, “The Camino is 90% physical. The other half is mental.” 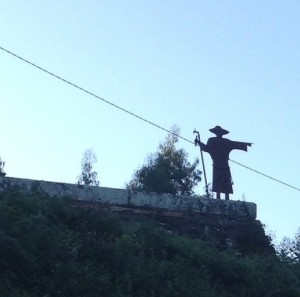 Although I was solo, the Portuguese Coastal route was a wonderful walk. The pilgrims I met were initially strangers, but also friends just waiting to happen. When not listening to my Camino playlist, this Camino gave me a clearer understanding of myself, even though the world remained a deeper mystery. It was an intensity of experience, which I think can only be gained by walking. Not to understate the challenge and difficulty at times, like remaining cordial in the face of provocation. Light travels faster than sound, that’s why some of the pilgrims appeared bright until they started talking. Though I am gregarious by disposition and still retain contact with some of those I met.

You would think that it’s not possible to get lost when all you have to do is keep the sea on your left, but I managed to do so a couple of times. Just south of Vigo, I got off track, but a friendly local took me 10 kilometers out of his way, back to the coast. The kindness of strangers.

No wonder an earlier inquiry left this gentleman baffled! 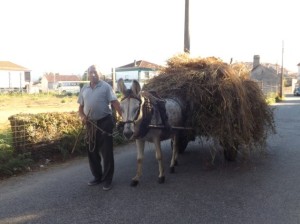 Esposende remains etched in my mind, for it was there that I suddenly became aware of blood in my urine. I stayed in my hotel room, resting for 16 hours; it stopped and I walked on, not knowing it was a sign of deeper trauma to come. What did this Camino teach me?

It was best to try to live each new day, as if it was the first, or last day of my life.

Fast forward to Christmas Eve 2013 when I was informed that I had invasive bladder cancer. From three options, I chose to have complete removal of the bladder. After chemotherapy in the spring of 2014, I underwent a nine-hour operation, where my bladder was removed along with my prostate and appendix. All done by “keyhole” surgery – like painting your hall, stairs and landing through the letterbox. Viva the National Health Services of the UK!

Still, whilst recovering, I made renewed plans for another Camino—the Via de la Plata. After all, as Hubert Humphrey memorably said: “Oh my friend, it’s not what they take away from you that counts – it’s what you do with what’s left.”

Cancer is a journey, but you walk it on your own.

I booked flights to Seville in April 2015 to start the Via de la Plata with my friend and fellow peregrino, Mac. I began training again, recording each walk, weight carried and average kilometer per hour. We made a great Camino; target achieved. Una Terra única e inolvidable. 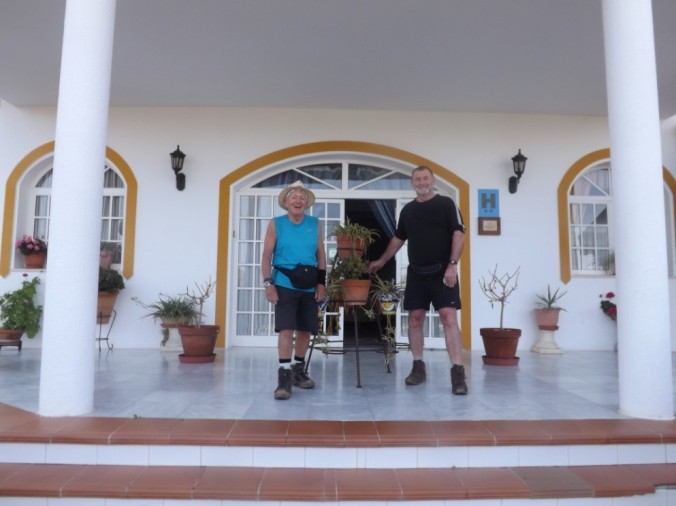 “For me there is only the traveling on paths that have heart, on any path that may have heart, and the only worthwhile challenge is to traverse its full length–and there I travel looking, looking breathlessly.”
―Carlos Castaneda

Not too breathlessly I hope! Our second stage of that Camino is planned for late April 2016; flights booked, accommodation sorted.

Finally and most recently, the Camino Inglés, walked in September, with Mac, Dermot and brother-in-law, Roger. For the latter two, a chance to walk long enough to obtain a Compostela, which we all did. We learnt not to confuse a short walk with “easy.” It was a joyous pilgrimage, of varying vistas and unexpected surprises. I could walk anywhere with these guys, their humour, patience, gregariousness, stamina, great appetites – real boons to me. Thanks for the words of advice . . . and the others! 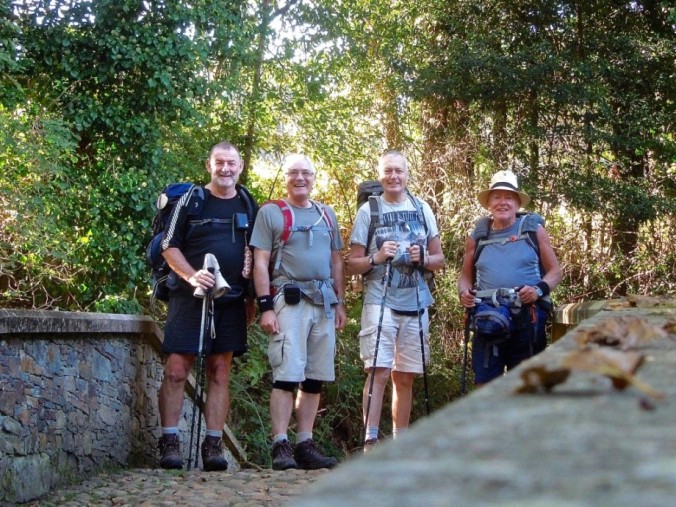 We all had different purposes for our walk: reasons of faith, reasons of curiosity. For me, partly, it was the pleasure I got from having organized the Camino and its successful completion. And seeing Sanctu Iacobu (St. James) afresh.

So, what did the Camino provide? Before being ill, the Camino provided me with opportunities to enjoy new vistas, befriend and be befriended by strangers, a sense of adventure, great food and drink – experiences common to all.

Recovering from illness, there was an extra layer – to test myself, renew self confidence and belief. Despite initial and new feelings of anxiety and stress, after a couple of days, those feelings were blown away. Every time, I left with a lot of “baggage” I always returned having shed it all.

The Camino provided me with the realization that a fundamental difference between being a tourist and a peregrino, were opportunities to take chances, not knowing where I might be sleeping that night, being uplifted by the chance meetings with others. The tourist pretty well knows what she  or he is going to see, after all, that’s what they paid for! But for the peregrinos, “The footprints of those who walked together never vanish.”

PS- All the above Caminos can be explored in greater detail at: ensuitepilgrimblog.wordpress.com

And the time taken to smell and photograph the flora and fauna!

John is truly an inspiration. I wish him many more buen Caminos!  Follow his blog at ensuitepilgrimblog.wordpress.com.

If you would like to share your thoughts about what the Camino provides for you, use the form below or email me with your text and photos. I also produce short video interviews of peregrinos. See Cathy Seitchik Diaz and Mike Miller. Keep your Camino alive and share the love!

3 thoughts on “What the Caminos provided for the Ensuite Pilgrim”