Continued from The Tower of Hercules.

After exploring A Coruña’s beaches and the Tower of Hercules, I decided to hop on a local bus for a ride to the Ciudad Vieja (Old Town). A Coruña was once a medieval town, and the remains of some of the walls are still visible.  The huge Plaza María Pita, named after the woman who helped save A Coruña from the British forces, marks the center of town.

I don’t like war, but I love the story of María Pita! And I appreciate when cities honor the brave women who played an important role in history. So, who was María Pita?

Below is an article from the Ancient Origins website:

Maria Pita: The Woman Who Saved a Galician Town from the British
At the end of the 16th century, the fleet of Queen Elizabeth wanted to take control of the waterways from England to Portugal. The group of galleons headed by Sir Francis Drake were the dread of the ports of western Spain. On May 4th 1589, English forces seemed to take control of the lower city, La Coruña, in Spanish Galicia, and the citizens needed hope. They found it not in soldiers, but in a woman whose brave actions saved the city.

In May 1589, the British attacked one of the oldest cities in Spain – La Coruña. On the battle of the 4th, Pita left home, as one of very few women, to protect the city with her husband. Regrettably, her husband was shot by a crossbow and died immediately.

At that moment she could have gone back home, but sources say that Pita was driven by pain and joined men who were fighting the invaders. She killed an English solider when he tried to reach the highest part of the wall. Then Maria stood on the top of the city walls and shouted Quen teña honra, que me siga (“Whoever has honor, follow me!”).

Quen teña honra, que me siga! (“Whoever has honor, follow me!”)

Brave and fierce, María Pita is the city’s beloved heroine who is honored every August during Fiestas de María Pita. Learn more here. 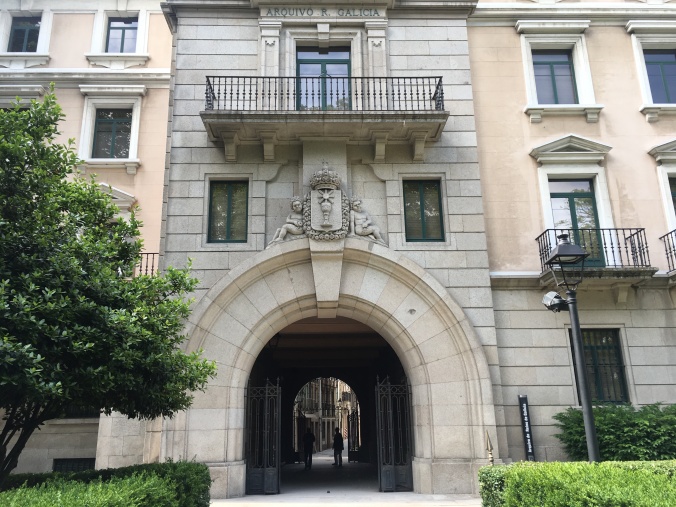 I found a peaceful plaza to rest at. A seagull was enjoying taking sips from the shell-shaped basin at the top of this fountain:

After so much walking and then watching that seagull drink, I felt famished! The hotel receptionist had circled some areas on a map with good tapas bars. The hunt was on. It was around 5:30 p.m., but restaurants in Spain usually don’t open until 8 p.m.  and most Spaniards don’t eat dinner until 10 p.m. 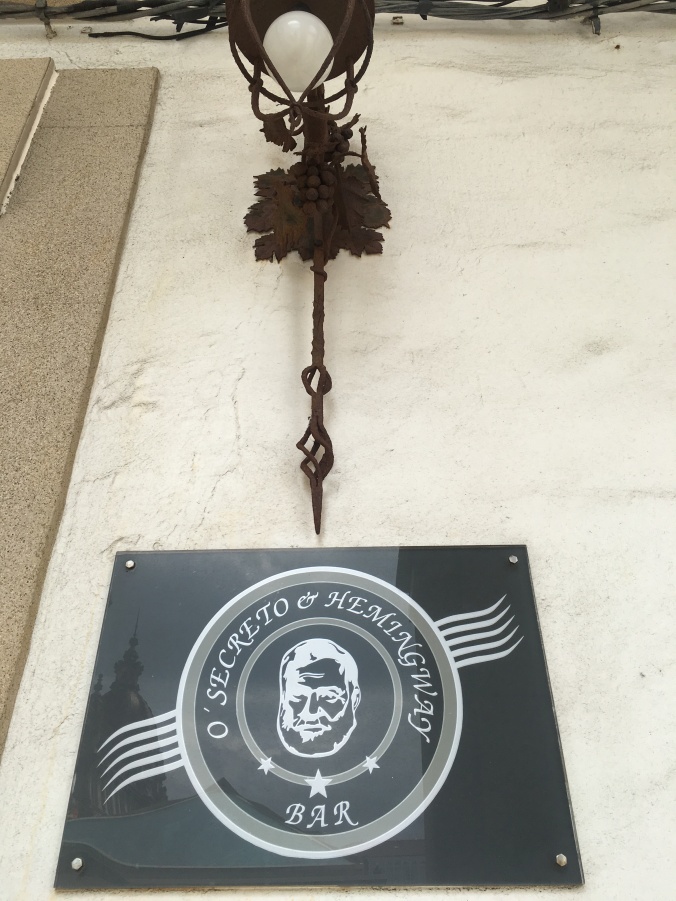 What’s the secret? I’m a fan of Hemingway, so I really wanted to know. But this place was closed.

I knew that a cold caña (draft beer) would stave off the hunger, and every bar in Galicia sells Estrella beer—my favorite. I walked along a pedestrian-only street looking for restaurants. A bar called El Escribano (The Writer) caught my eye. I had asked if they served food and the bartender said the kitchen didn’t open until 8 p.m. I liked the name and vibe of this place, so I ordered a caña anyway. To my sheer delight, the server also brought a hearty bowl of bean stew with hunks of jamón (Spanish ham). 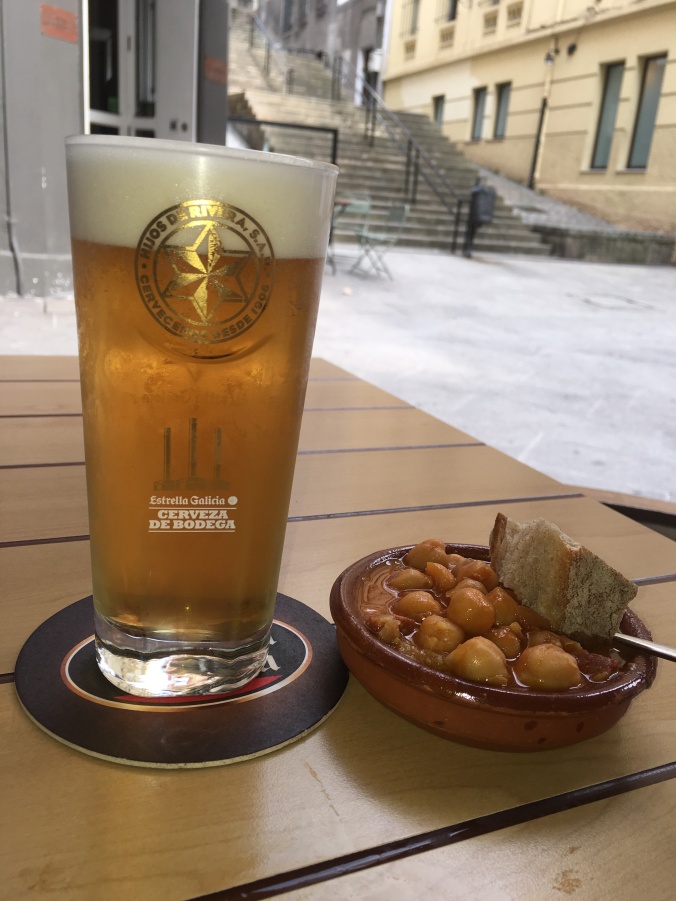 I love the free tapas in Spain! I thanked the server profusely in Spanish, telling her how she saved me. She gave me a big smile and nodded.

I studied the brochure that the tourist information office gave me.

A Coruña is also known as the Ciudad de Cristal, or City of Glass. Houses with large glass balconies are common all over Galicia, but the most famous are here.

Those who live in glass houses have great views!

View of the marina

Some European countries have interesting rituals. In the evening, stroll through the pedestrian zones of the city. In Spain it’s called the Paseo (stroll); in Italy, the Passagiata. To me, it’s like the “cruising” ritual in America back in the day, but without cars. I loved joining the locals for these evening strolls. In A Coruña, the paseo was along the marina.

Many of the locals were eating ice cream cones during the paseo.  I saw them lined up at an ice cream shop, so I joined the queue. When it was my turn, I asked what was the local favorite. A lady in the shop pointed to this flavor: Queso do Cebreiro con Membrillo.

I had no idea what membrillo was, and when I asked, she just said “fruta.”  Surely they wouldn’t put a gross membrane of something in ice cream. LOL! I ordered a scoop and it was delicious! I looked it up later and it turns out that membrillo is quince paste. I’m not the only one who thought there were a lot of people eating ice cream in this city!  This particular flavor was featured in this article Best Bites in La Coruña on the Spanish Sabores website:

I have never been to a city where so many people were eating ice cream. No matter if it was 4:00 p.m. or 10:00 p.m., it was impossible to walk two blocks without passing someone with an ice cream cone.

I now understand why. The vast majority of the ice cream sold in the city is made using milk from the regional cows, much of which is organic. That ultra-fresh milk is then combined with typical Galician ingredients to make some downright stellar ice creams.

But out of the multitude of ice cream shops and flavors that I tasted, one stands far above the rest: the Queso de Cebreiro con Membrillo ice cream at Heladería Italiana.

This old fashioned ice cream parlor mixes fresh, un-aged cheese from the nearby village of Cebreiro and bright burgundy chucks of quince paste into their creamy ice cream. The resulting ice cream is too good for words. My ice cream-obsessed taste buds are already demanding a return trip to La Coruña and a daily supply of this ice cream!

One of A Coruña’s oldest buildings is the Church of Santiago (Iglesia de Santiago). The tympanum at the entrance of the church shows a figure of the Apostle Santiago (St. James) riding a horse. Above this is a rose window. 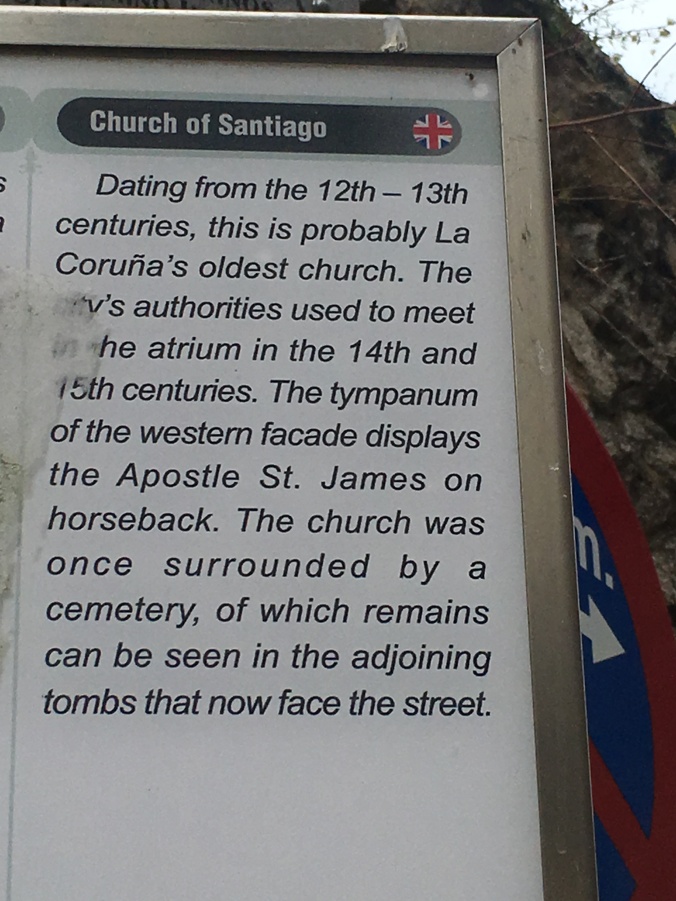 The Church of Santiago sign is a little worn, but still readable. 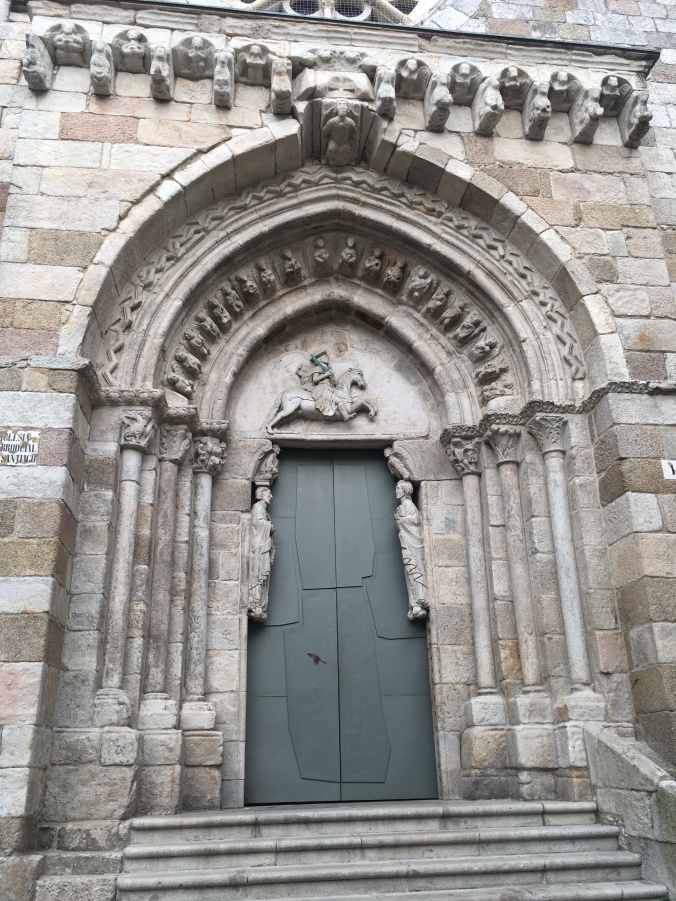 I sat for a while, hoping that the church would open, but it didn’t.

The back side of the church has a cruxeiro

It seems to have been constructed over the remains of a Roman temple. The original construction was Romanesque, but there have been Gothic additions after that. 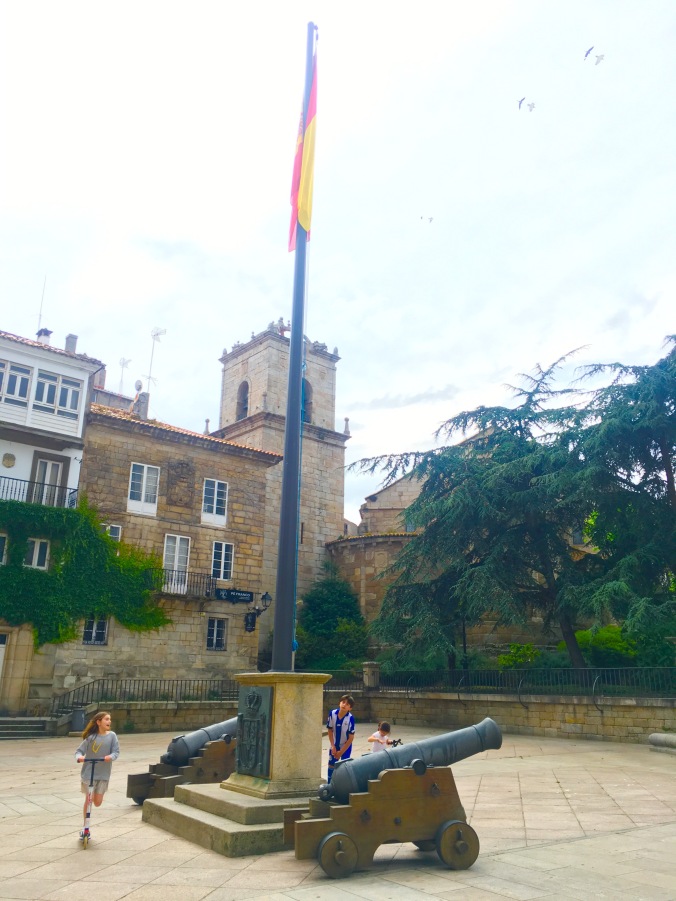 Kids playing on canons in the small square behind Saint James Church.

More pretty churches that were closed. 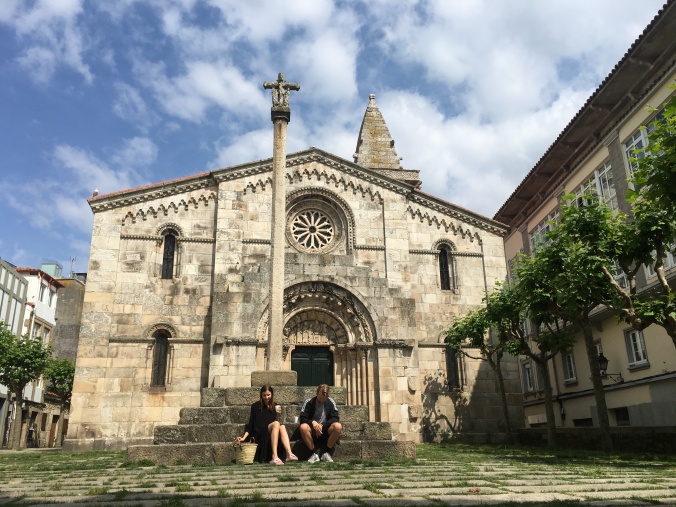 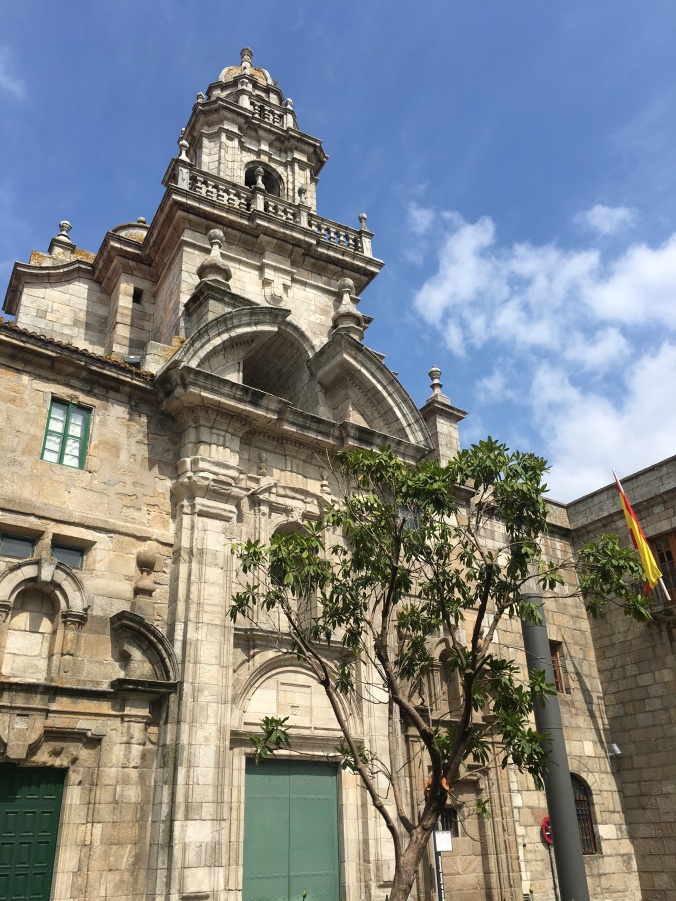 On my way back to the hotel, I finally saw a church that was open! 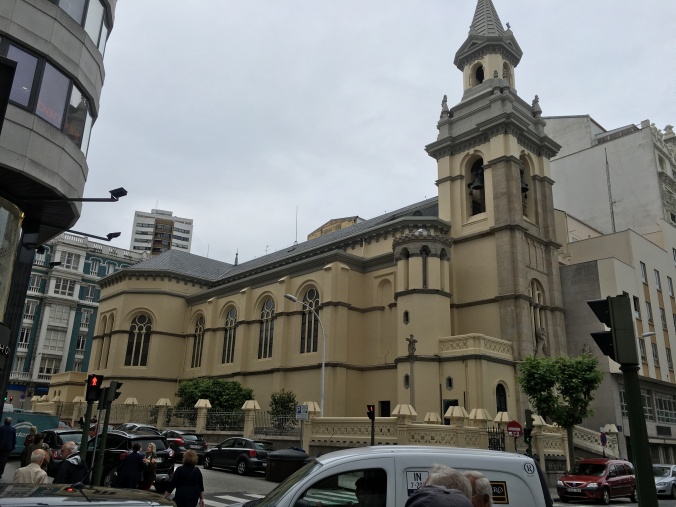 I attended the evening mass and lit a prayer candle.

Before I got back to the Coruña Mar Hotel, I stopped in the Moom 57 nightclub that was across the street. (See photos of my hotel at the end of this post)

I stopped in this trendy nightclub to see what the vibe was like.

I love a good nightclub, but was way too exhausted from my big day.  It did have a nice dance floor, DJ booth, and disco ball, so perhaps I’ll visit it after a future Camino.

The side of the nightclub that faces the hotel had this fun sign: 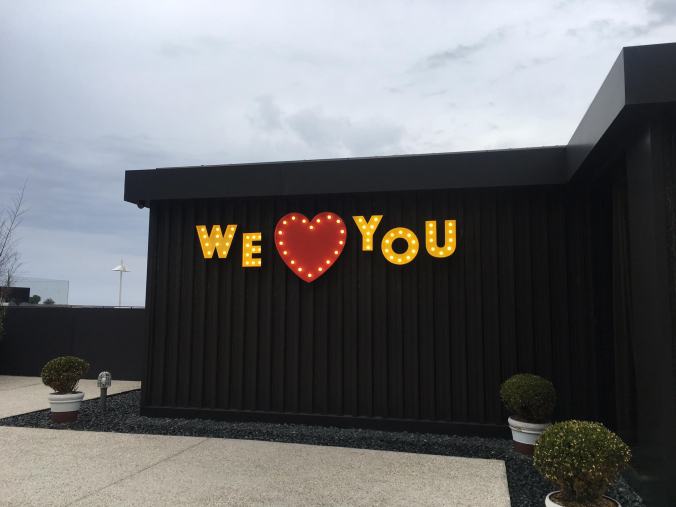 Aww, Spain, I love you too!

I estimate my walk this day to be about 13 miles, most of which I walked without a backpack, but it was still good Camino training. I slept like a baby, despite the base booms from the Moom across the street!

PILGRIM TIP: Bring your credential with you for sello and a good map from the Tourist Information Office located at Plaza Maria Pita. I hear they also have a good walking tour.

Stay tuned. I’m unpacking my Camino, adding photos to the Facebook album, and rolling out the posts. All of my stages will be added to this page: Camino Inglés 2017.

One thought on “A Coruña Old Town” 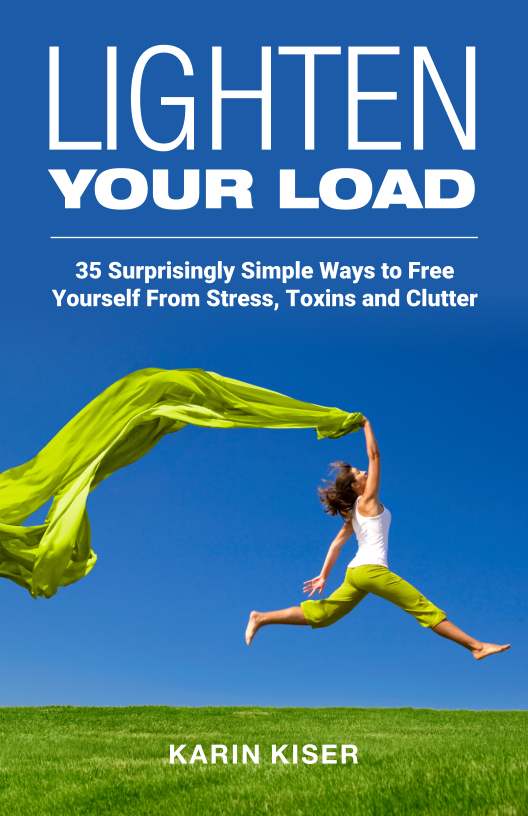