Continued from Neda to Pontedeume

After our amazing time frolicking in the waves at Playa Magdalena, Nancy and I headed to Pontedeume, which is just across a 14th-century bridge.  My feet were a little salty and sandy from the beach so I walked those last couple of miles in my Z-Trail sandals, with my shoes strapped to my backpack. 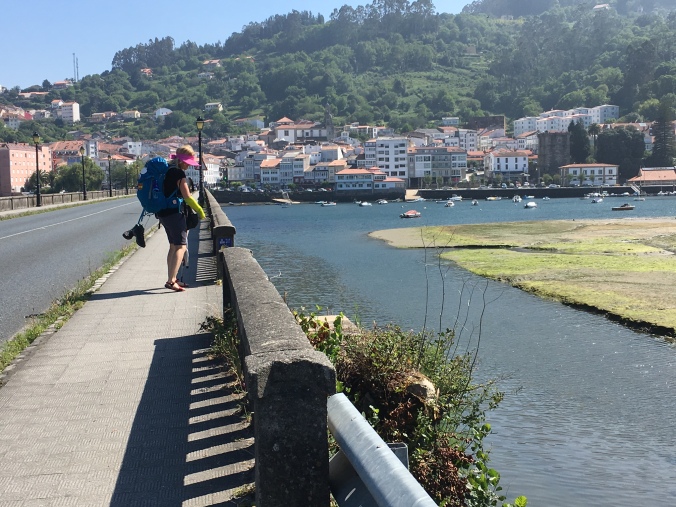 Upon entering the town, we saw the sign for the municipal albergue and headed over.  Once again, there were pilgrims milling about but no hospitalero to be found. I went upstairs to the loft where the bunk beds were to see what was available.  It was hot and crowded up there.  I immediately felt claustrophobic. Meanwhile, Nancy looked at the bathrooms downstairs and said the showers were open, communal, and on the grungy side. The only photo I felt like taking at this albergue was this poster with an aerial view of Pontedeume.

The muni albergue had a nice poster of Pontedeume

We decided to try our luck again and see what other accommodations were available. We went to some albergues the guidebooks listed, but nobody answered our calls and door knocks. They must have been on siesta.

We then went to a rather large hotel right by the river called Hotel Eumesa and asked about availability. 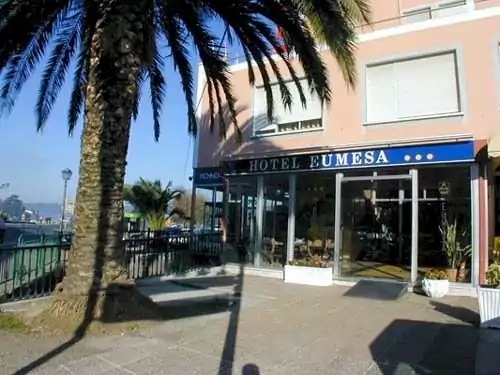 The hotelier gave us keys to see a room. The rooms were large, clean, and had private bathrooms. For 33 euros, the rate included a continental breakfast buffet.  We could have shared a room, but we felt like having some privacy, so decided to each get our own room. When I saw the large bathtub,  I knew that I wanted to repeat the spa bath ritual that I did at the Parador in Ferrol. I made a mental note to find a grocery store that carried the sea salt. After showering and resting with my legs up the wall, I went to do some sightseeing.  I went up to the church, which was chock-full of Camino shells and St. James imagery. 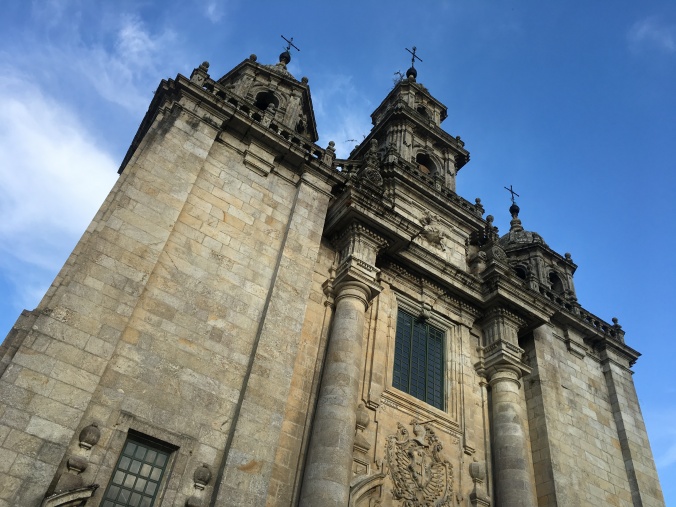 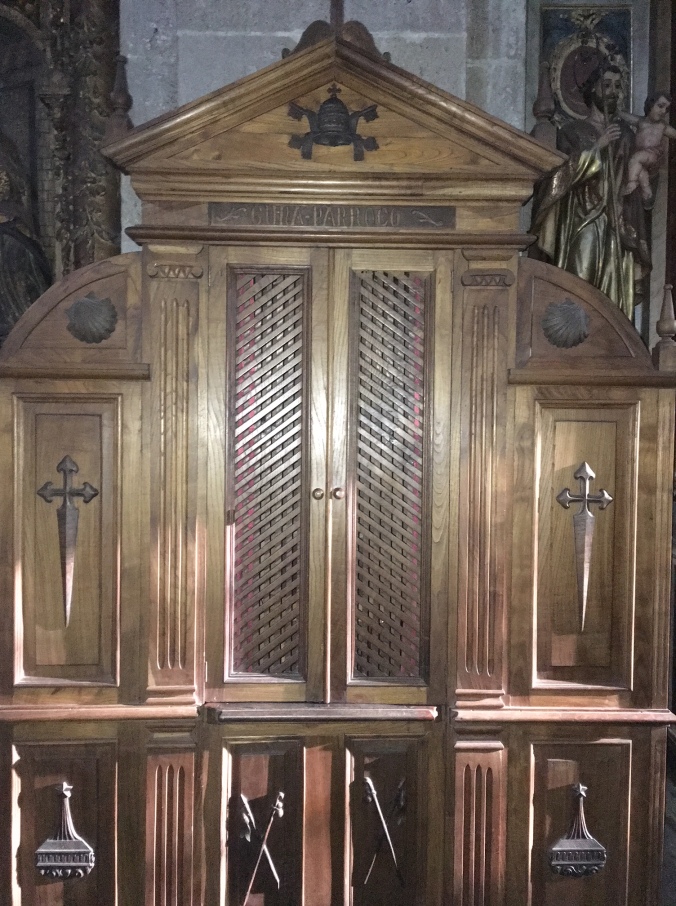 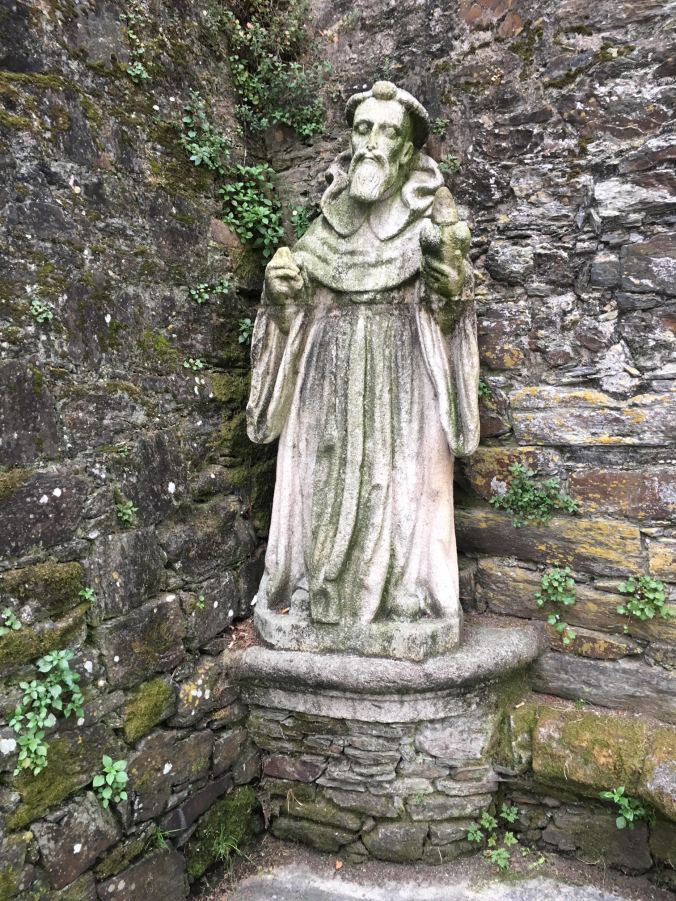 Walking through town on cobblestones.

Later, I felt like having some Albarino wine and pulpo (grilled octopus), a Galician specialty,  and found a bar that serves it, with seats outside. 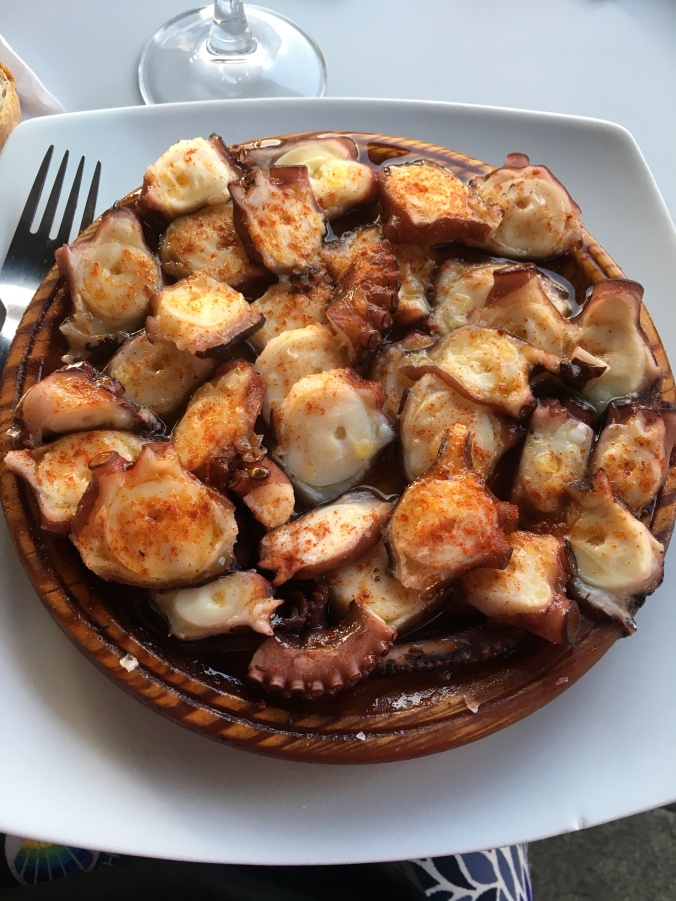 I saw Nancy and invited her over. She had an Estrella beer, and they gave her a generous portion of pasta as a free tapa. They gave us lots of bread, which I used to sop up the paprika and sea salt-flavored olive oil that the pulpo was grilled in. I never eat this much bread, except on the Camino where I can burn it off walking!

As envisioned, I found a little grocery store to buy snacks for the next day (banana, yogurt, peach) and some sea salt for my bath. 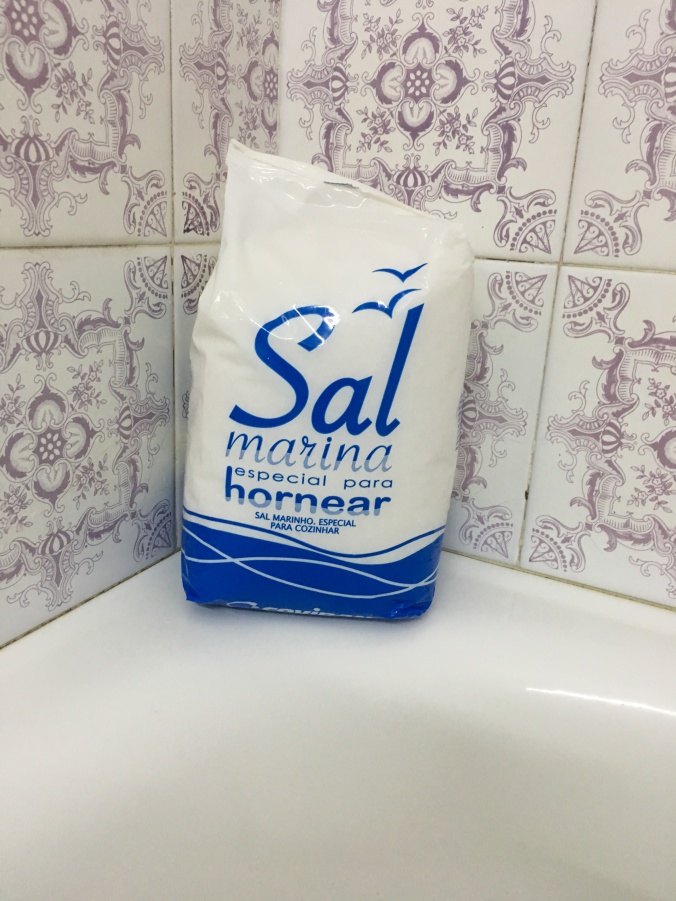 It was only 90 cents for 2 kilos, so I ended up having an incredible muscle-soothing soak, which felt amazing after a long day of walking. Needless to say, I slept like a baby! 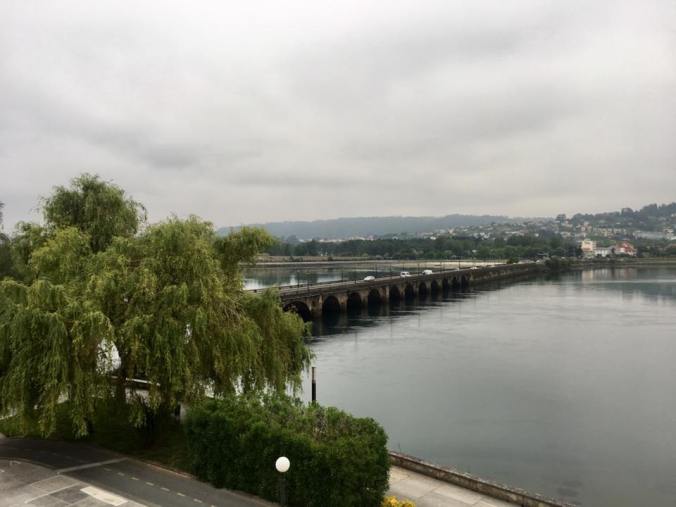 The room at Hotel Eumesa had a view of the river and had enough space to do yoga in the morning.

Up next, Pontedeume to Betanzos.

All of my stages will be added to this page: Camino Inglés 2017.  There are more photos of my Camino Inglés on a Facebook album and Instagram.