While Pauline’s incredible journey through Spain ends soon, her entertaining stories of the Camino endure. I love  her ability to make friends quickly and express the Camino Camaraderie as evidenced in  Not Ours to Keep. 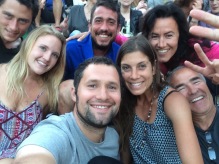 “I’ve spent the last three weeks of the Camino being an adopted daughter to a retired Swiss man, who never had a child of his own, and confiding in a new big sister, an Australian yogi who sold all her things to travel the world. These were just two, among the many incredible people, who touched my life during the Camino, and for whom I will forever be grateful for.”

I was a little worried about her choices when I read On Getting into Cars with Strangers, which was quite hilarious!

My “please dont kill me” smile

“Now, I may get into cars with strangers, but I’m not about to hop into the back of a freezer truck, which conveniently was soundproof and locked from the outside.

I stood my ground and asked him to retrieve my backpack for me, because I was too tired for this man’s bullshit. And, I really don’t have the time to be kidnapped.”

Pauline is feisty, fearless and fabulous!  I look forward to seeing where her adventures take her next.

I am so glad Pablo over at Set Meravelles got his Camino mojo back! I stumbled upon this post, Camino de Santiago Etapa 9. Bilbao-Ortuella, where he talks about leaving Bilbao after two years to continue his Camino.

Pablo has been to almost every province in Spain. Sometimes he posts about previous trips like Cádiz and some relaxing Sherry for not such a high tarifa, which brought back memories of a trip we took in 2008. Not only does he write about the nitty gritty details of backpack travel, he includes lots of interesting facts and historical background as well.

I appreciate that he takes time to translate into Spanish, such as his latest post Oñati.

“This weekend, I took a break from the Camino de Santiago to work on my Basque Bucket List. I was itching to explore a new town without having to worry about time and how much walking I could get in.

¡Qué bueno! These translations help me brush up on my own Spanish skills, which unfortunately are rusty from lack of use.

He is a big fan of Austin Powers, so if you see Pablo in the Basque region or somewhere else in Spain, say “yeah, baby, yeah!”

If you have a Camino blog that you’d like to have featured on The Camino Provides, email me at laurie@thecaminoprovides.com.

One thought on “Friday Faves: Camino blogs by Pauline & Pablo”