Happy summer solstice! In some yoga circles, it is traditional to celebrate the changes of seasons—the summer and winter solstice and the vernal and autumnal equinox—by doing 108 Sun Salutations. This practice is most often done in large groups and often as an offering, such as an offering of peace or unity (see The Global Mala Project, which facilitates collective yoga events typically including 108 Sun Salutations).i

What Are Sun Salutations?

Surya Namaskar (Sanskrit for Sun Salutation) is a series of yoga poses done in a continuous, flowing sequence, intended to improve the strength and flexibility of muscles. Sun Salutations are an excellent way for hikers to warm up and stretch their body. You can benefit with just a few rounds before any workout or hike. See below for the classic twelve steps of Surya Namaskar and a variation of the series that you can do without a mat. When on the Camino, I would start each day with a few rounds of half salutations, and I truly believe that they helped prevent injuries.

For a complete cardio workout, challenge yourself to do 108 of them upon the change of seasons.

Number 108 carries spiritual significance throughout a wide swathe of cultures:

I learned about this tradition of 108 Sun Salutations in 2014. A yoga studio in Berkeley offered a session of the practice on the day of the summer solstice, but it was going to last three hours. I didn’t have that much time, so I searched YouTube for 108 Sun Salutations and found a variety of videos to follow.  I recently recorded a video of me leading 108 Sun Salutations. The full practice takes only 53 minutes to complete.

After completing my first 108 Sun Salutations, I felt great!  I was curious about this Ultimate Yogi program. I ordered the box set of DVDs from Amazon and took the Ultimate Yogi challenge of 108 days of yoga. It whipped me into shape! I ended up doing it again in 2015 and shared a few tips in this post: 10 Ways to Hack your Yoga Practice.

Come to a relaxed standing position, with your arms at your sides and your feet together. Breathe deeply through the nose and match each breath with a movement, per the 12 steps below.

Below is a video of the steps of Half Sun Salutation. See, you don’t need a mat. You can even do it barefoot, , in hiking boots, on a precarious cliff, high above the mountains. You get the idea, you can do these anytime, anywhere.

This year the summer solstice falls on a Monday in the Pacific time zone. I admit I sometimes get the blues on Mondays as it means I have to go back to work. To celebrate the solstice, I’ll be leading a hike after work, followed by 108 Sun Salutations. This has become a new tradition in my yoga journey! On the last winter solstice, I led the 108 Sun Salutations at Oakland’s Lake Merritt Bandstand. Despite the rain, five brave yogis joined me and stayed for a gratitude meditation at the end. Mark your calendars for 108 Sun Salutations during the autumnal equinox on Thursday, September 22, and winter solstice on Wednesday, December 21, 2016. 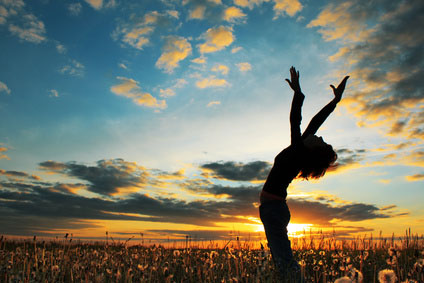 I want to share my passion for yoga with the world, so I’ll be scouting out the best festivals and upcoming yoga events in the SF Bay Area. I’ll also include a variety of:

This is intended for newbies and experienced yogis alike. Life is a journey and yoga makes it more blissful. Join the tribe!  Subscribe now.

5 thoughts on “108 Sun Salutations for Solstice”

Leave a Reply to Laurie A. Ferris Cancel reply